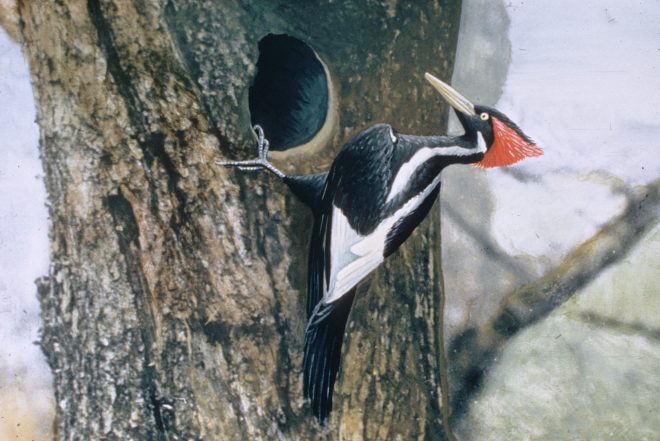 The U.S. Fish and Wildlife Service introduced Wednesday that it’ll give itself six extra months to determine whether or not to delist the Ivory-billed Woodpecker “as a result of extinction.”

Final September, the company revealed a proposed rule to take away 23 species from the federal checklist of endangered and threatened wildlife and vegetation as a result of extinction.

A number of days after the proposed rule was introduced, we revealed a narrative by which a number of long-time Ivory-bill searchers stated delisting the chicken could be “absurd” and “actually untimely.”

“Recognizing substantial disagreement amongst consultants relating to the standing of the species, the Service is extending the deadline to permit for added time to evaluate data,” the company introduced in a press launch in regards to the six-month extension.

An announcement in at present’s Federal Register provides: “This example has led to a big disagreement relating to whether or not the species is extinct. Due to this fact, in consideration of the disagreements amongst consultants surrounding the Ivory-billed Woodpecker’s standing, we’re extending the ultimate dedication on the proposal to delist the species for six months so as to solicit further data that may assist to make clear these points.”

“The Service is searching for new data throughout the 30-day reopening, together with clear video or photographic proof of the presence of the Ivory-billed Woodpecker that may be repeatedly interpreted the identical method by unbiased observers, similar to definitive photographic proof collected by a subject observer,” the company stated. “Feedback supplied throughout the preliminary proposal and the earlier reopening don’t should be resubmitted.”

Data on learn how to submit feedback earlier than August 8 is out there at www.rules.gov.

Join our free e-newsletter to obtain information, photographs of birds, attracting and ID suggestions, and extra delivered to your inbox.

Gallery: Embroidered Birds for the Eye and Ear

Is your furry buddy a choosy eater?

Is your furry buddy a choosy eater?